The Golden Circle is one of Iceland’s busiest highlights and the first stop most tourists make. I wanted to self-tour the loop as I was already paying for a rental car for the day and I wanted to be able to set my own pace. At the same time, I wanted to be able to have a ‘guide’ experience and not have to google everything on the go. Next best thing to a real guide? An audio guide! 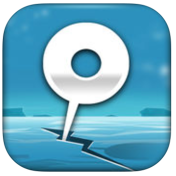 I found this app called SmartGuide (Android, iOS) that has an audio tour of the Golden Circle. It is a free application that consists of a Golden Circle tour and several smaller excursions including a downtown Reykavik walking experience. The tour can be pre-downloaded so I didn’t have to live stream it. Location services need to be enabled for the application to have real-time automatic data stream.

I plugged it into my car’s audio system and had the app running in the fore-ground. It picked up my location and automatically started playing an audio clip every time I passed something note-worthy on the loop. It also played clips related to the main attraction once I reached the sites. I switched to headphones at this point and pretty much had the app walk me through the site I was at. The app can also be manually controlled to play particular clips. Best part, location services works on airplane mode, so I wasn’t even using my data for this!

The tour not only covers general facts but also a few Icelandic legends / stories. I got just the right amount of data and was not disappointed. It was generally an interesting experience that held my attention.

I also used the app when I stopped at a small fishing village on the East Fjords called Eskifjörður. That tour was not bad, worth a shot if you’re in the area. I wouldn’t go out of my way for it though.

Here’s a detailed run-down of my Golden Circle self-tour experience!