I landed on a Friday morning, mid-May 2017 and was greeted with a cold winter-ish wind as I stepped out of KEF airport. I had rented a car from Avis / Enterprise for my road trip. The rental car and insurance was probably the most expensive part of my trip. I picked up my car and headed to the Hilton Hotel at Nordica, about 30 mins from the airport and 10 mins from downtown Reykjavik.

I decided to land a day before my vacation officially started and work from my hotel room. It was a good decision tbh. I got some work done, got a couple beers from the excellent half-off happy hour that the Hilton Hotel hosts every evening and got a good night’s rest.

I decided to start my adventure in Iceland with the Golden Circle. This is a small ~240 KM (150 Miles) loop in the Western part of the country, easily accessible from Reykjavik. As it has a little bit of everything, the loop has been referenced as the perfect ‘introduction’ to Icelandic scenery across multiple travel sources. Because of this and its easy access from Reykjavik, the Golden Circle is generally more tourist heavy than the other parts of Iceland.

There are several tour companies that specialize in taking tourists through this route. The tours cost $80 – $100 and generally last from 6 hours (express tours) to 8 hours (regular tours) starting in the morning or early afternoon. Doing a guided tour has it’s own pros – detailed information from a knowledgeable source, driving is taken care of and a schedule that is maintained.

I decided to do the Golden Circle on my own, as I already had a rental car. Doing a self-tour also allows you to keep to your pace, switch up the itinerary, stop where you want to and stay however long you need to. Also, it is really easy to drive the circle, just one loop with plenty of signs along the way! I downloaded the SmartGuide app for a free pre-recorded audio tour.

I started off around 10AM from Hilton Nordica and drove East to start the Golden Circle loop.

My first stop was the Þingvellir National Park (pronounced ‘think-vet-leer’), which lies on top of the border between the North American and European tectonic plates, how crazy is that! Just a note, this is not like crossing the equator. There’s no distinct line that marks the border that you can walk across. Apparently, tectonic plates are way too massive for a clear definition like that. It is possible, however, to see the rift, Silfra, that is formed between one small part of the plates. There are dive sites at Silfra for those interested in taking a dip. At this point, if you’re doing the audio tour I mentioned before, there are some interesting facts on Viking culture and the significance of this park to people back then. You can walk around and explore the area here! 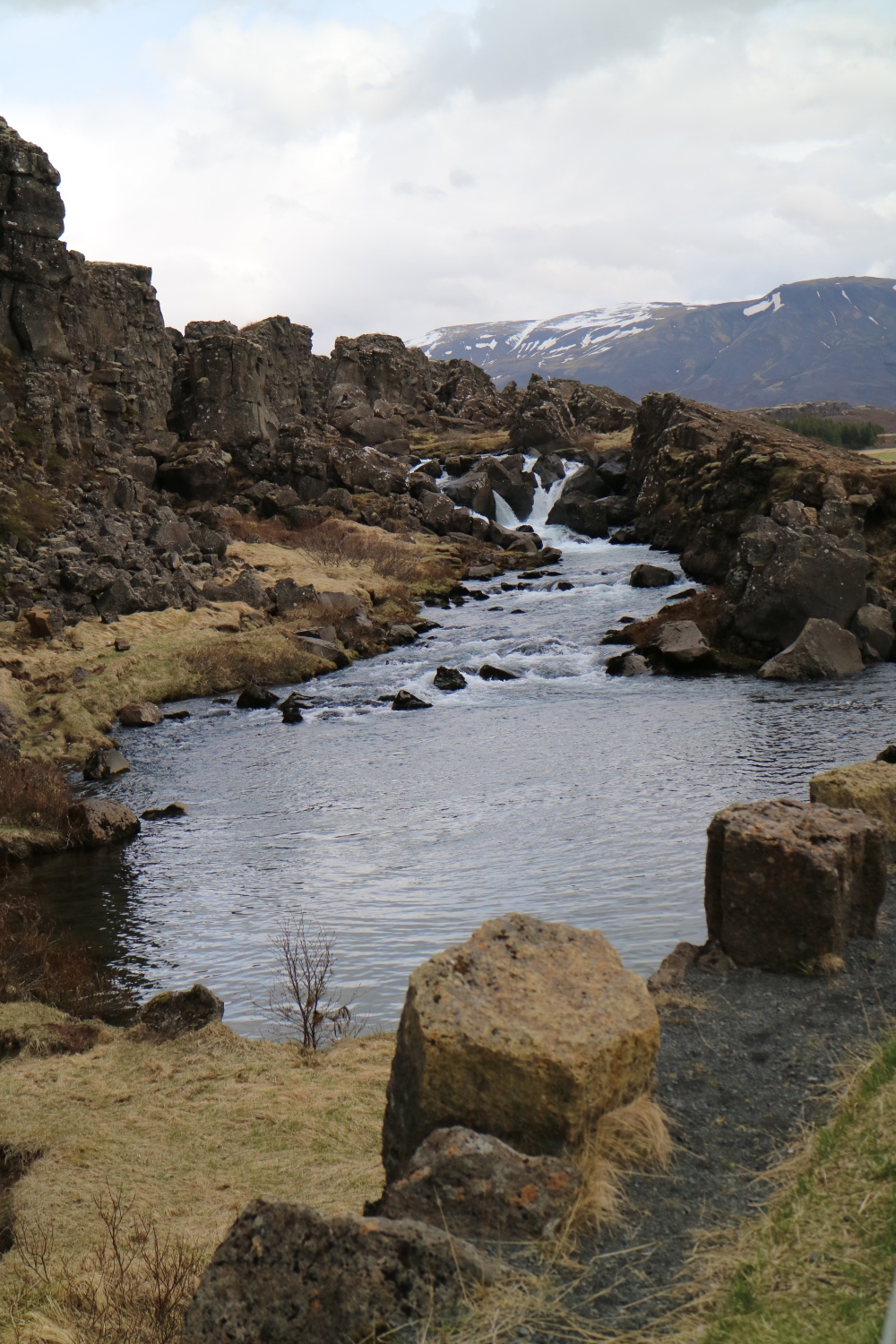 My second stop were the geysers – Geysir and Strokkur.  It’s a 5-10 mins walk up to the geysers from the slightly over crowded parking lot. Geysir used to be the more famous of the two because of how high the water would shoot up but the geyser has been dormant for the last few years now.

Not to be disappointed! Strokkur next door is an active geyser that shoots up to 30 meters of water almost every 10-15 minutes. It’s a little tricky to get good pictures as the water erupting is sudden and brief, but it’s an absolute vision. Feels like that part of the earth is alive! If your camera has an option for ‘Continue Shooting’ mode, now would be a great time to use it. Video is always another option as well! I was in a bit of a rush and dropped the ball on this one with the pictures

There are a few cafes I came across on the loop and at the sites themselves. All looked wonderful and cozy and I ended up grabbing and coffee in one as I started at the mountains right outside.

Next up was Gullfoss (foss = waterfall, now you know one word in Icelandic!). The beautiful two-tierd waterfall is marked by the story of a brave young woman, Sigríður Tómasdóttir. As legend has it, Sigríður threatened to throw herself off the falls to protect it from exploitation. Although the claim that her efforts saved the falls is still in question, her story is one that is still remembered. Regardless, I was glad that the site was protected and left as a natural wonder.

My last stop was the Kerið Volcanic Crater (pronounced ‘key-er-eth’). The scene looks like something from a movie. This is the only site I’ve been to in Iceland, where I had to buy a pass to get in. It was around $4 and totally worth it. And as you can see, not too many people around. 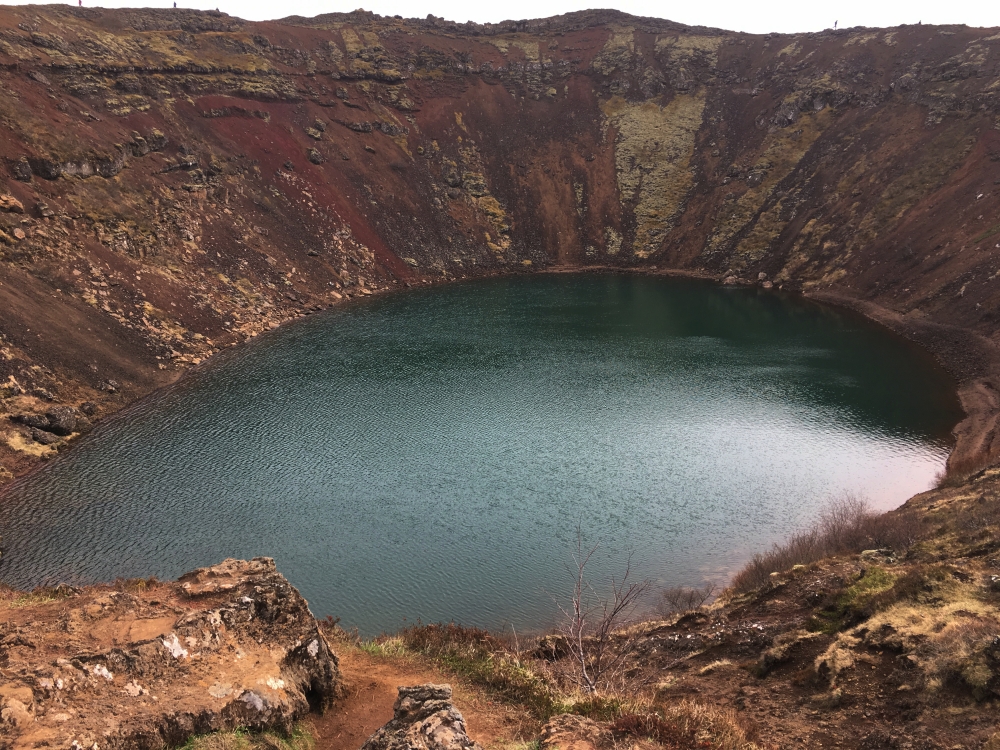 The biggest lesson I learned from Day 1 is that it was SO HARD to not keep stopping every 15-20 mins to take pictures! Everything I saw was just so beautiful, I just wanted keep taking pictures. And honestly, I felt like the pictures I took didn’t even do justice to what I was seeing in person. I tried to exercise self-control for the most part, but there were some moments of weakness that kept putting me behind schedule. Oh well, guess that’s why a solo trip worked out!

Please feel free to ask a question or leave a comment below!

Next up, Ring Road Diaries!! Day 2 started off with Southern Iceland’s waterfalls and black sand beaches!